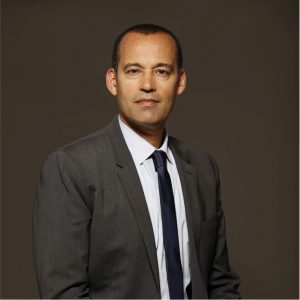 He started his career in 1989 as a Software Developer Engineer at Cap Gemini in Paris before managing, from 1991 to 1997, IT development and infrastructure teams in Société Générale’s trading rooms. He came back in January 1998  to Tunisia to help SG enter the country by acquiring a retail bank and co-founded 2IC, a consulting and software company for capital market and supply chain  activities with offices in  Tunis, Paris and London.  These companies were sold to European companies, including GL Trade in 2006, a company listed in Paris.  The sale resulted in growth of the Tunis R&D center.  Yassine Brahim was first appointed COO and CEO of GL Trade at the end of 2006 and moved to London in this context.  GL Trade was sold to SunGard at the end of 2008 and Yassine took over a broader responsibility for Europe and Asia within SunGard, and contributed to the extension of the Nearshore Sungard teams reaching 400+ people. The Tunisian revolution was an important event in the life of Tunisians, includingfor Yassine who wasappointed Minister of Transport and Equipment on January 27, 2011 for a period of 6 months before the first elections.  He also co-founded a social liberal party was elected MPat the end of 2014 and served as Minister of Development, Investment and International Cooperation in 2015 and 2016. Yassine Brahim returned to business as a Consultant in 2013 for SunGard, then in 2014,  2018, and 2019 for Blackfin Capital Partners in M&A business on software companies or on IT due diligence or transformation of companies operating in Finance or Insurance.

A Tunisian and French national, Yassine is a graduate of Ecole Centrale de Paris.