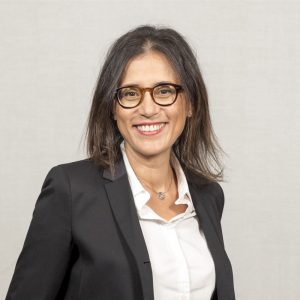 She started her career in 1989 as a Supply Chain and Process Management Consultant at Ouromoff & Associates for 9 years.  Back to Tunis in 1998, she co-founded 2IC, a consulting and software company for capital market and supply chain  activities with offices in  Tunis, Paris and London and continued to advise clients in Europe and Tunisia on their Supply Chain processes .  At the end of 2002, Inès joined Tunisiana, the second Tunisian mobile telephony network, at the time of its foundation, to take care of the choice and implementation of the company’s CRM software, then was in charge of the Customer Service department.  At the end of 2006, Inès moved with her family to London and began two years of MBA studies at London Metropolitan University.  Returning to Tunis in 2010, Inès joined the founding teams of Orange Tunisia as Director of Management and Process Programs until 2018, when she became the company’s HR Director.

A Tunisian and French national, Inès is a graduate of Ecole Centrale de Paris.